This reflection was originally posted on LinkedIn 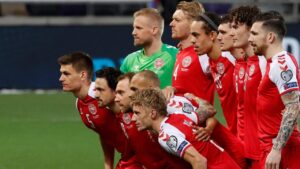 This evening it is all over, the final European championship in football (soccer) 2021 will be played and the continent reverts to a more normal state of affairs. I admit that football is not one of my prime passions, but since our national Danish Team did very well and reached the semifinals, I did pay attention.

This short write-up is not about analyzing the game or the debatable way in which we lost the semifinal, but instead about a team that seemed to function as a close unit in a way that has attracted attention across the globe. They exhibit so many of those characteristics that we for years have been trying to guide agile teams in organizations towards.

A Danish philosopher Svend Brinkmann commented the other day that it was remarkable how success was not achieved through the popular mantra in the growth fables of the day, be Strong, anything is possible, have big dreams, and be bold on burning platforms. Instead, it was achieved through collaboration, commitment to the team, and a coach who has consistently taken on the role of the Servant Leader.

The Team demonstrated remarkable resilience when one of the key players – Christian Eriksen – suffered heart failure during a match. They were able to regroup and come back.

It is good to see how much this is a parallel to what we try to move Teams towards when we teach and coach Agile, Lean and Scrum. It shows how universal the values and principles are. Coach Hjulmand has a coaching education from the University of Copenhagen. I would hire him any day as a Scrum Master.

As a parallel, I have recently been through the Danish healthcare system due to an operation at the hospital in Vejle, Denmark. Again I had a very positive experience of a cross-functional Team operating as a unit with extreme attention to the customer – in this case me, the patient, and very effective collaboration. There were none of the silos of competence that hospitals have suffered so much from, there was no upstairs and downstairs between doctors and nurses. Everybody communicated, patients were kept in the loop and explained what went on. It was a joy to watch, and of course very comforting as a patient.

One particular incident was noteworthy. A person was about to administer the anesthetic to me just before the operation, he went through the plan that the chief of anesthetics had created before and written down. This person noticed that there was no checkmark in front of a section specifying a certain local anesthetic sympathetic blockade. He stopped and said, “Hey this is unusual, we always do this with this kind of surgery, does anybody know why it is not marked?”, nobody knew, he then said, “Ok, then we call him!” He got the expert on the phone, who in turn explained that because this particular procedure was complex, he would wait to see what the surgeons ended up doing in detail before he decided what drug to administer. Ok, there was a good explanation, but it could have been a mistake. The person in the frontline was not afraid of opening his mouth and asking, and the expert was not above giving him a reasonable answer. There was Psychological Safety, the patient experienced being in safe hands, kudos!

When dealing with complex situations, where we only have fragmented knowledge, but we have to act anyway; then we need a team of closely-knit people with complementary skills making sense of things and choosing a course of action. For such a team to work there must be psychological safety, trust among team members. This takes time to develop. It is still hard for most people to accept that this teamwork of multiple perspectives is necessary, often you hear, “How hard can it be?”. But it is hard, yet in little pockets of common sense, it thrives and creates extraordinary results.