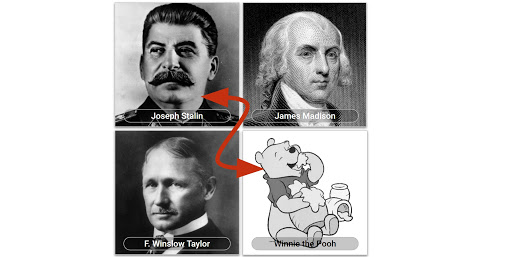 Earlier this year when our Meet Up group was just getting started we presented a Webinar called “Leadership: from Stalin to Winnie the Pooh.” Since then we have received many questions about it and requests to revisit the subject of differing leadership styles. So here it is again, in its second edition.
—-
Over the years, leadership styles have ebbed and flowed, ranging from the brutal dictatorships of Stalin, Saddam Hussein and sadly many others, to the happy-go-lucky, brainless variety where the only aim of the leader is having a good time. This might be a bit hard on Winnie the Pooh and his relentless quest for honey, but perhaps you get the idea.

Similar patterns exist in organization management, from the command and control, a hierarchical style born in the nineteenth century, which largely persists to this day, to the more collaborative approaches typified by Lean and Agile frameworks.

In this free Webinar, we discuss the evolution of leadership in today’s complex and rapidly changing world, with its highly educated, technologically savvy workforce. We propose that the best interests of all organizational stakeholders are served by adopting team-based, inclusive approaches where everyone is invited to engage and commit to the collective aims and objectives of the organization and its customers.

We argue that the hierarchy as such with its focus power and perks has to be replaced with a more network-oriented spread of authority and responsibility. The Hierarchy is such a potent extrinsic motivator, that the quest for rising up the ladder will obscure the intrinsic motivation of people and will control their behavior. But in honor of James Madison, we need to have due process and checks and balances in organizations so that no single individual is able to go on a power hike.

However, it is hard to discuss this openly as the opposite views seem so radicalized and polarized that they only see the opponent in the opposite corner as shown in the picture above.